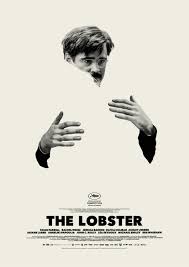 The artistic recognition of “The Lobster” (co-written and directed by the greek director Giorgos Lanthimos) in the 2015 Cannes Festival combined with a cleverly-designed anticipation for the release of the film, if not global at least Europe-wide. In London, promotion of the film was distinct. For weeks the BFI website and Facebook Page excited the imagination of the cinephiles with micro-scenes, teasers and unofficial movie trailers. In most artistic cinemas the well known in its abstraction poster of the one-person hug  was put in place long before the release of the film while human size cardboard copies of the poster urged cinema goers to be the hugging person and get photographed as such.

But what about the film itself?

The Lobster describes a society in which not being in relationship is forbidden. Those single (Loners from now on) are (self?)exiled and find refuge in the woods. If they ever find themselves in the city they can be at risk of stop and search by the security forces, and will be asked to provide a relationship certificate/verification and prove they do not belong to the Loners of the woods. This is a persecutory and oppressive attitude by the established society which reminds of the police attitude towards the migrants for instance, or the young blacks  and muslims of London suburbs, if I had to draw a parallel to the real society. The Loners appear to be a similarly marginalized, stigmatized and criminalized social subgroup.

On the unfortunate occasion you become a Loner, the Lobster society forces you to check in in an “idyllic” hotel (brings “idyl” to mind -“romance”) with a 45 day deadline to find a new mate. If you do not succeed then you transform into an animal of your choice (Lobster is Lanthimos’ main hero’s choice). The rules of the hotel, as absurd, wacky and bizarre as they can be, are strictly and indisputably followed, as if the transformation of a man into an animal is indeed an indisputable metaphysical determinism. The relationship between the Loners is depicted as a war game of survival. The Hotel Loners are both hunters and candidate preys to a violent play in the woods in which they desperately try to hunt and “drug down” each other  in order to earn a little more time before they end up turned into animal.

The first part of the film, the hero’s staying in the hotel, is a dark, grotesque demonstration of the absurdity on behalf of a social majority against those who do not comply with the rules laid down. The Loners, from initially “volunteer” hotel guests, now turn into desperate inmates who feel the clock ticking against them. Compliance with the rules can only lead to psychopathy, in the sense of the absolute incapacity and aversion of relating, removing any trace of emotional contact among people desperate for contact. Exactly the opposite of the alleged aim of the hotel’s society.
The second part, the hero’s running away in the woods, continues dark and grotesque. The viewer realises quite quickly that the society of the consciously Loners in the woods is only the antipode of the society in the Hotel. The same irrational, bizarre, wacky rules. With similar semi-insane, psychopathic supervisors for their implementation. And those who can not follow the rules suffer in a similar way. Those who still maintain a basic emotional world ready to have it revealed in a love relationship, find themselves on the same desolate confinement. This psychopathy is what is brilliantly illustrated in the Lobster. And the despair of love relationships too, in a fashion delightfully comic.

One of the obsessions of the protagonists is the matching of their personal characteristics. The heroes are anxious to find common traits that will make them a couple, eg nearsightedness, a frequent nosebleed, a limp leg. Feelings, love, emotional contact itself does not play a role, these have been replaced by compulsion, the external necessity of relating, a cold, inanimate and unimaginative approach between two caricatures. It is no coincidence that the word matching is a typical word in dating apps like Tinder. You add your features in the app, and the other add their own, a fancy algorithm then will look for matching and eventually you will be notified on your the desktop or  phone screen that your mate is found for you. The cold, calculating way to relate with each other lies at the core of the film.
The scene where the main hero realizes that the only common trait (nearsightedness) he shares with the woman he loves is lost when she gets blinded  is a tragic scene. He begins to desperately ask her if she can speak German, if she plays the piano, if she loves blueberries, only to receive negative responses by her. For love is there, but it is as if it is not, as if it doesn’t matter, as if love is something humiliated, substituted by a checklist of mutual characteristics, as if indeed man is transformed into an animal. And the communication codes, the language of love that testifies matching and union with its presence is converted here in a restricted, degrading, ridiculous process that causes the viewer laughter and sorrow. What is the norm in love, passion and physical contact, is the object of criticism and the reason for punishment in the world of the Lobster.

Faithful to the distinctive approach of the characters in his films, Giorgos Lanthimos creates heroes who have no depth, no history, no other dimension beyond these he allows depicted. All heroes in this film, both protagonists and secondary, are nothing but caricatures. And the way they relate with each other highlights their nature. Their movements and behavior are deliberately allowed to resemble a children’s show.

And all this for two reasons.

The first is that in the Lobster, main protagonist is the Relationship itself. The Relating and more specifically the lack of it. The second reason is that Lanthimos wants to state that in no way should we relate in such a way. Such relating is ridiculous, psychopathic, we need to be kept in distance from it, not to allow any approach. The funniest moments of the film, and also the most grotesque and the most cynical, are precisely those where the director allows us to get closer to the way Relating is permitted to the protagonists. The fact that the director’s insistence on it increases not only its ridiculousness but also the actual discomfort of the viewers (eg the jacuzzi choking scene, the dog murder scene or the knife scene at the end) just shows the creepy non-human nature of the type of relationship depicted.

Looking into the movie as a whole, its purpose is achieved. I think that the film suffers elsewhere. In the first part, in the hotel, there was a serious risk of repetition of the same scene over and over again. A mannerism in terms of both form and content was fortunately averted before completely spoiling the solid result. However, the risk averted in the first half reappears in the second one and leaves its footprint. The sense of balance on the second part seems to be lost in the woods. The initial internal rhythm of the film is left behind and the narrative from half the film on seems to lose its cohesion and leaves the viewer with the uncertainty of where exactly the story goes. Without doubt this film has a large number of good ideas that translated into some brilliant scenes, but it appears that this occurs at the expense of its inner pace and consistency of telling the story. As if the director did not manage to contain his anxiety of needing to show how many good things he had in his mind. As if impressing the viewer with his inventiveness was more important than the essence of the story. I think this is a matter of experience, I’m pretty sure in his next film Lanthimos will be more dominant on his own ideas or more thoughtful of what exactly he would need to show.

In summary, I found the Lobster an excellent cinematic study on the issue of love relationships in our post-postmodern era. The idea of ​​the film is given with a series of brilliant scenes, through an incredibly clever screenplay and via a hard-worked personal style, however some kind of narrative anxiety unfortunately blurs the total film result. I respect Giorgos Lanthimos and I very much like his work. I think he is own way of realising the many good potential he has. His journey in this seems to be safe and this is because it is well and hard worked and because he and his associates seem to be talented and intelligent. I look forward to Lanthimos’ next work wondering if he will indeed manage to keep up to the expectations he created.